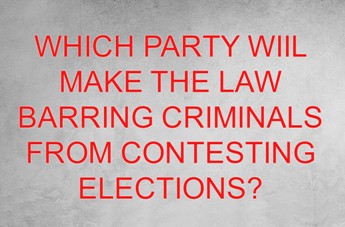 Criminals Will Continue To Be Lawmakers

Criminals Will Continue To Be Lawmakers

Editor-in-Chief of indiacommentary.com. Current Affairs analyst and political commentator. Writes for a number of publications. View all posts by this Author
The Supreme Court has done the right thing by not barring netas who have serious criminal cases pending against them from contesting elections. For, although it is morally repugnant to have alleged criminals working as lawmakers, it is also not right for the courts to bar them in the absence of a law on the subject. The court has just said that these alleged criminals must declare in bold all charges pending against them in election affidavits and also advertise the fact by inserting paid advertisements in media.

Public opinion has to be generated to force parliament to enact a law that will bar netas who have cases on specific charges in any court of law. Since all parties depend on muscle power to win elections, no party will support such legislation. This is proved by the resistance to automatically disqualify netas from membership of parliament or assemblies from the date of conviction. The Congress and the BJP are both against it. It is a given fact that crime pays exponentially when netas support criminals. Hence, it is very difficult to smash the nexus between politicians and criminals.

Criminals have become an integral part of the Indian political system. The netas bestow patronage on them because they do all the dirty work for them. Some criminals work their way up the party hierarchy, or start their own parties, to contest elections and become lawmakers. Although these people maintain a clean record by never getting convicted, the whole world knows they are criminals, musclemen or bahubalis. Yet, given their importance in collecting funds, intimidating opponents and doing other sundry dirty work including organizing crowds at meetings, they have become indispensible to all parties.

The Supreme Court has done what was legally correct. The legislature must now do what is morally correct. For, the kind of people we allow to sit in our legislatures defines the kind of government we get, the kinds of law we make and the kind of political culture we develop. It is too much to expect the people to reject such candidates. They are too afraid to vote against them since they know that these criminals will hurt them for doing so. The best way is to have a law to bar them from contesting. But which party will do it? When they are trying to give concessions to convicted netas, it is unrealistic to expect them to bar alleged criminals. Hence, there is a need for building public opinion.