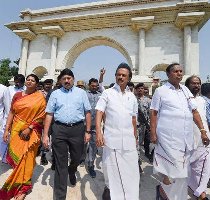 View all posts by this Author
Buoyed by his partys excellent showing in the general elections (the DMK had an amazing 100% strike rate: all its 27 contestants were elected as MPs), DMK chief M K Stalin has sought to remind Narendra Modi that India is not only about Hindi-speaking people, referring to the fact that the bulk of BJPs votes and seats have come from the Hindi heartland.

But Stalin forgot that the BJP had done exceedingly well in Marathi-speaking Maharashtra, Kannada-speaking Karnataka, Bengali-speaking West Bengal, Odiya-speaking Odisha and the entire North-East where a variety of languages are spoken. Parties in Tamil Nadu are so obsessed with their hate for Hindi that they refuse to recognize that the BJP has long shed its Hindi-speaking, Brahmin-Baniya, north Indian party tag to increase its footprint all over India. That it did not make a mark in the southern states (barring Karnataka) is something the party is likely to address in the very near future.

There is no doubt that the DMK and Stalin have moved in admirably to occupy the vacuum created by the demise of Jayalaitha and Karunanidhi, the two titans of Tamil politics. They were, of course, helped in large measure by the infighting in the AIADMK and the lacklustre performance of the incumbent government. But that does not give Stalin the licence to preach politics to a leader who has received a stunning mandate from people across the country. Narendra Modi has already said that he will carry everyone with him in order to provide good governance. Hence, it would be better if Stalin sheds his prejudices and helps Modi to build a strong nation.