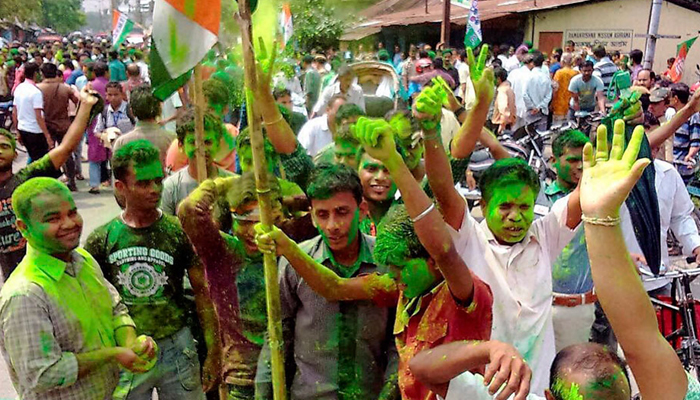 Yogendra is undecided whether he wants to be a writer. So he writes to see if he can be a writer. Ha Ha View all posts by this Author
Despite the opposition cry of the local polls in Bengal not being free and fair, the fact remains that Mamata Banerjee and TMC continue to hold an iron grip over the states voters. Such is the mesmerizing effect of didis persona that despite several of her lieutenants being questioned by investigating agencies in financial scams, the opposition failed to make any impression in the just concluded elections. The score card read: TMC 140 wards, BJP 6 wards and Left 1. The Congress was totally decimated.

There is no doubt that the BJP has taken over the mantle of being the main opposition party from the Left. But does it really matter when the difference in votes is so great. The Left was already in tatters when the BJP started making a serious bid. So taking over the miniscule space vacated by them is not going to be enough. The BJP simply does not have the required infrastructure throughout the state to take on the might of TMC. It also does not have a leader who can even match 1% of Mamatas charisma. With a state that has nearly 28% Muslim voters, it is a huge task for the BJP to fight both the TMC and unite the Hindu vote.

The Left parties and the Congress have ceased to matter in Bengal. Most of the cadre of both parties have either joined the BJP or are whiling their time. The voters of both the parties have switched allegiance to either the TMC or the BJP. The biggest gain that the TMC has made, apart from gaining seats from a divided opposition, is to grab a greater vote share, which exceeded 50% overall. That the same story was repeated in all parts of the state does not augur well for the opposition parties in 2019. If BJP has any pretensions of seriously challenging the TMC then, it has to start building the party from the grassroots level. It is easier said than done though, as there is no leader to drive the initiative and no muscle-power on ground level to counter the dedicated TMC workers.