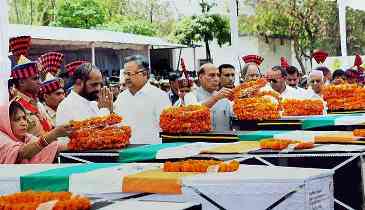 Maoists Can Be Neutralized Only Through Development

Maoists Can Be Neutralized Only Through Development

Editor-in-Chief of indiacommentary.com. Current Affairs analyst and political commentator. Writes for a number of publications. View all posts by this Author
It is a well known fact that the Left and the extreme Left does not want the fruits of development to reach the poor. For, then, their agenda of keeping the poor in a permanent state of war with the administration will fail. They try to prevent the administration from improving the conditions in tribal areas and then go back and tell the people that, see the government does not care about you. The rapid pace of road building and creating other infrastructure in Chhattisgarh is threatening the Maoists. They feel that they will become irrelevant when the people start enjoying the facilities of roads, police stations, hospitals, banks, schools and start receiving the benefits of government schemes. Hence, they will do everything they possibly can to stop this. The attack on the CRPF personnel must be seen in this light.

The government is building a road through the heavily Maoist infected area around Sukma. That will be a boon to the people of the area. Once the road is built, other benefits will necessarily follow. This is the process the government is adopting to bring the tribal people to the mainstream. Taking the fruits of development to a hitherto neglected area is one way of improving the life of the people who have been living on the margins for long. It will give them access to better healthcare and communication while expanding the market for their products. It will change their lives. The Maoists do not want this to happen.

It is difficult to fathom what the Maoists actually want. They have been harping on the fact that the state does nothing for the marginalized people. Now when the state is actually doing something, they use brutal force to prevent it. Killing 26 CRPF jawan might be their way of perpetuating their agenda, but no right thinking Indian can support it. There were reports that villagers informed the Maoists about the location of the CRPF camp. The villagers do this out of fear, for the Maoists kill them if they dont. But what about educated and the so-called intellectual class that supports the Maoists? Instead of prodding the government to develop the area, this class joins hands with the ultras to provide them with moral, legal and monetary support. Is this in any way different from what Pakistan is doing in Jammu & Kashmir?

The government must show restraint in the face of this grave provocation. An eye for an eye has never served any one well, and is not the most intelligent way of correcting things. The Maoists must be neutralized  by extreme force, if required. But there are other ways to do so. Intelligence must be beefed up and instead of liquidating them; they must be captured and brought to justice for waging a war against the state. Police must be instructed not to torture the captives. The sympathizers must be warned of the consequences in aiding and abetting such a covert war. At the same time, development work must be redoubled. If necessary, the money spent on cosmetic repairs to already good towns and cities must be diverted to create the basic infrastructure in deprived areas. A sustained campaign to educate the people must be undertaken and instead of threats, the people must be won over by showing them development.

There is only one way to defeat the Maoists  development. Unless the fruits of development are visible to the people, they will be easy fodder for the Maoists misinformation campaign. With Aaadhar and Jan Dhan accounts already in place, the government must ensure that people in such extremely deprived areas eking out a subsistence level existence, are made to receive the various government benefits. These are the people who actually need it, not the already creamy layer that keeps cornering them. If this is not done quickly, more youngsters will join the Maoist brigade and more Sukmas will keep happening.