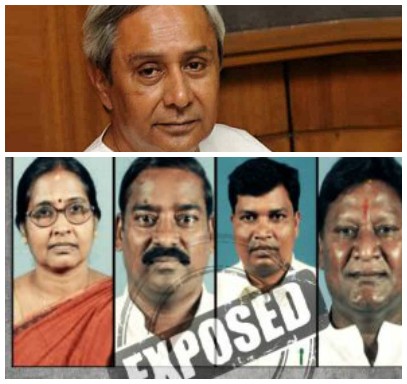 Editor-in-Chief of indiacommentary.com. Current Affairs analyst and political commentator. Writes for a number of publications. View all posts by this Author
Naveen Patnaik, the Biju Janata Dal (BJD) supremo, has been ruling Odisha with an iron hand since March 2000. Anti-incumbency or scandals do not affect him as he presides over a party that has 20 out of 21 MPs in the state and 117 out of 147 of its MLAs. In 2014, the Saradha ponzi scam had netted many names from his party and there was a call for probing Patnaiks involvement too. But nothing much came out of it although investigations are still on.

But now, a local channel has aired a Narada-like Odisha-sting where three MLAs of the BJD have been shown demanding money for helping three men who were posing as industrialists. In another video, a separate party MLA is heard boasting that mining major Vedantas alumina refinery could not take off as it did not negotiate the bribe to be paid properly.

The MLAs in the footage have been identified as Simarani Nayak, Bijoy Nayak, Sushanta Behera and Anam Nayak. The MLAs are seen demanding money varying from Rs 5 cr to Rs 40 cr for getting NOCs, help in getting land and other permissions.

The reactions have been predictable. While the MLAs involved have cried frame-up, defamation by political rivals and conspiracy, the BJD spokesperson has said that the party will conduct an inquiry to verify the authenticity of the footage and take action accordingly.

It is a recurring feature of Indian politics that regional leaders who spend a lifetime building up a reputation for being honest are often surrounded by corrupt power seekers. It has been the same in Bengal where Mamata Banerjee is grappling with party leaders like Madan Mitra who are giving her a bad name. Naveen Patnaik is also a victim of misdeeds of his corrupt partymen. But one question continues to make the rounds in public whenever such a scam is exposed. The person on the streets asks that why is it that the government or the party was not aware that these corrupt MLAs demand money from industrialists? Or do they ignore their misdeeds because some part of the tainted money makes its way to party coffers? These questions need to be answered by the respective party supremos. Patnaik has to answer in case of this Odisha-sting.