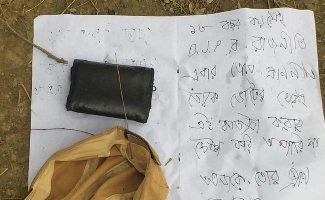 Holding an extreme view and carting the ball out of the park is what interests him most. He is a hard hitter at all times. Fasten your seatbelts and read. View all posts by this Author
The body of a BJP worker was found hanging from a tree in the Purulia district of West Bengal. That it was a political killing was not left in doubt when the note found in his body certified that he was killed for supporting the saffron party. The boys father has confirmed that he had canvassed for the BJP in the recently concluded panchayat elections.

The killing proves that the TMC, despite saying that the people are with it and regularly polling more than 50% of the votes in all elections, is scared of consolidation of Hindu votes because of its largely minorities-based politics. Having liquidated the CPM and reduced the Congress to some pockets, the party is worried at the trend of rising support for the BJP. Hence, it uses all kinds of strong arm tactics, including murder, to scare people away from supporting the BJP.

But the party must realize two things. One, 100% of the people will never vote for a single party in any democracy as peoples political preferences vary vastly. Two, there cannot be a vacuum in electoral politics. If the party has destroyed the support base of the Left and the Congress, it is not that they will automatically vote for the TMC. If they find an alternative in the BJP, they will gravitate towards it. This is increasingly evident in the way BJP is increasing its vote share in the state.

Although the BJP vote share is nowhere near the 40% CPM used to get in its heydays, it has steadily risen to be between 25 and 28%. There is still a 22-25% floating vote that goes to Congress, the Left and independents. If the BJP manages to take its vote share to even 35% and if there is a swing of just 3-4% away from the TMC, it will become very difficult for the party to retain a maximum of seats. That is the fear that is driving the TMC to violent tactics to retain support. But such tactics often backfire when coupled with anti-incumbency. The TMC has to be very careful lest its violence and murders drive more people into the arms of the BJP.