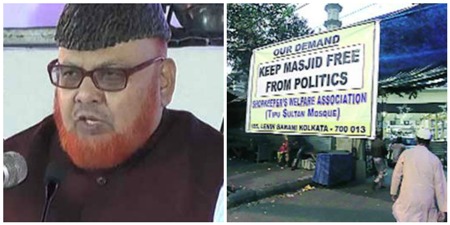 Editor-in-Chief of indiacommentary.com. Current Affairs analyst and political commentator. Writes for a number of publications. View all posts by this Author
Imam Nurur Rehman Barkati loves to be in the limelight. His colourful remarks and ill-advised fatwas have often landed him in controversy. Most recently, Barkati was in the news for issuing a fatwa against the Prime Minister Narendra Modi in which he announced a reward of Rs 25 lakh for anyone who could shave the beard of Modi and blacken his face with ink. This was done from a public platform in the presence of TMC leader Idris Ali, who did not protest. Barkati has become extra adventurous after his good relation with the state government.

But Barkati perhaps does not know the real significance of fatwas in Islam. They can only be issued by a scholar of Islamic jurisprudence. The Islamic Supreme Council of America says that A fatw? is an Islamic legal pronouncement, issued by an expert in religious law (mufti), pertaining to a specific issue, usually at the request of an individual or judge to resolve an issue where Islamic jurisprudence (fiqh), is unclear. People like Barkati are reducing the religious value of such pronouncements by not adhering to religious fine print and issuing fatwas at the drop of the hat. Also, he is letting his personal pique or bias creep into his official duty, which goes against the behavior expected of a supposed jurist.

More than 100 Muslim shopkeepers who are either tenants of the mosque property where Barkati presides or are located nearby have stood up in protest against Barkati. They observed a days closure, asking the Imam to keep the mosque free from politics. Much is being seen in this protest. If it is a genuine protest, it needs to be supported. But it could also be a landlord-tenant dispute, since the shops are located on mosque property. Comments should be reserved till the picture is clear.

What defies comprehension is why the state government did not act after Barkati issued his obnoxious fatwa. Inciting anyone to do such a thing to the prime minister of the country is a crime. Announcing a reward for it compounds the crime. Still, the state government remained a mute spectator. Barkati, whose name means blessed or one who can bless, is not a blessing for the Muslim community. His remarks are strictly personal and cannot be construed to have the backing of the community. Hence, he must be warned and restrained.