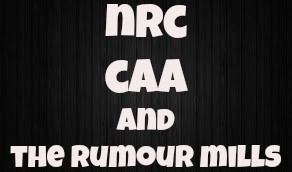 Provide Religion in Bank KYC: The Rumour Mills Are Having A Field Day

Provide Religion in Bank KYC: The Rumour Mills Are Having A Field Day

In the midst of the country-wide protests against the CAA and the NRC, the rumour mills are having a field day. Apart from obnoxious memes and fabricated videos on social media, the rumour mongers are also targeting places where it would directly affect the common man, and they are using the traditional media to spread these lies.

Just yesterday, there was a report in the media that claimed that henceforth, everyone wishing to open a bank account will have to provide his or her religion in the updated KYC form that was supposed to have been introduced. This was clearly an attempt to scare the minorities by alluding to the fact that bank accounts could now be segregated according to the religion of the holder.

The finance ministry noticed this and came up with a response immediately. Rajeev Kumar, Secretary, Department of Financial Services, Ministry of Finance, tweeted "There is no requirement for #Indian citizens to declare their religion for opening/ existing #Bank account or for #KYC. Do not fall for baseless rumours about any such move by Banks."

This shows that there is a section of the population in the country that is trying to disturb peace and harmony between communities by spreading lies and rumours. First, the Indian Muslims were made to believe that the NRC would target them. Then they were told that the CAA is against them. Now they were being told that by asking for religion in the KYC form of banks, the government would segregate their bank accounts. All of these are untrue. These rumours are being spread with mala fide intent.

The government must immediately use the audio-visual media (even the Supreme Court has asked it to explore the possibilities) to explain to the people the provisions of the NRC and the CAA, as also counter malicious rumours as and when they are brought to its notice. It should also explain the reasons for the failure of the NRC in Assam and how it proposes to revamp the model before undertaking the exercise throughout the country. In short, it should do all it can to calm the agitated masses and not allow them to be swayed by whatever they are hearing.