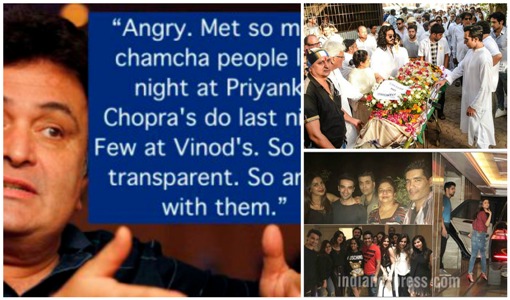 By our team of in-house writers. View all posts by this Author
People are talking about how Rishi Kapoor is right in pointing out that most stars of this generation are only interested in having a good time and are disrespectful in some ways towards elders in the industry. The immediate reason for Kapoors ire is the near total absence of young actors at Vinod Khannas funeral. Khanna was active in films till recently. He had acted in the hugely successful Dabbang with Salman Khan and Sonu Sood. There were other films too where actors of this generation had acted with him. Yet, they chose to absent themselves from the funeral, expressing their grief on Twitter instead.

People say that Rishi Kapoor is also right in pointing out that the young brigade (he calls them chamchas) were out in full force at Priyanka Chopras bash just a night earlier. People say that since high profile parties mean exposure on Page 3 and immense scope for networking, this generation never misses them if thrown by any A-grader like Priyanka. But people are also saying that Twitter cannot replace physical presence and this generation is guilty of disrespect in not attending the funeral, especially when the film industry is like a close-knit family.

Some critics took umbrage at the fact that Rishis young son, Ranbir, was also not present. But they did so before verifying the facts. Kapoor was quick to point out that his wife Neetu and Ranbir were out of the country. Amitabh Bachchan, with whom Vinod Khanna starred in some memorable films, was present with son Abhishek. People are saying that the this generation stars should neither dismiss Rishi Kapoors tirade as outpourings of a demented mind nor should they ignore it. Rather, they should introspect and ensure that they are more respectful towards seniors. Kapoor has called their behavior shameful but the more apt word is disgusting.