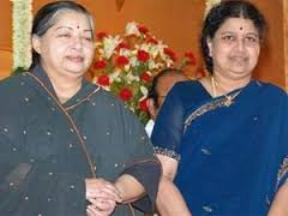 Sasikala Natarajan: When Will She Be Madame CM?

Sasikala Natarajan: When Will She Be Madame CM?

Editor-in-Chief of indiacommentary.com. Current Affairs analyst and political commentator. Writes for a number of publications. View all posts by this Author
Rumblings have started in the AIADMK. The power struggle is taking the shape of two camps  one headed by Jayalalithas long time friend and confidante Sasikala, supported by chief minister O Panneerselvam and about 100 MLAs and the other by a motley disgruntled group not having the support of more than 40 MLAs. The miffed group says that Panneerselvam was anointed chief minister in indecent haste and is just warming the chair for eventual takeover by Sasikala.

Sasikala has been running the party and the administration behind the scenes for a long time now. Hers is a domineering presence. She has put handpicked bureaucrats and police officers in place and can now count on their support. Both Sasikala and Panneerselvam belong to the thevars caste and they form a majority among the MLAs. Sasikala has adroitly placed her cards in a manner that her ascension is just a matter of time.

The charge of the disgruntled group that Panneerselvam was sworn in haste does not hold water. Party supporters used to deify Jayalalitha and hysterical scenes could have been witnessed post her death. If no one was in charge, it could have led to the situation getting out of hand. Despite Sasikalas alleged manipulations, the party displayed maturity in elevating Panneerselvam.

It remains to be seen whether Panneerselvam is playing the same role of chair warmer for Sasikala that he twice did for the Supreme Leader Jayalalitha or whether Sasikala will let him rule as a front and will pull the strings from behind. Resorting to such extra constitutional power centre would be dangerous though and the right thing for her would be to assume the mantle at a time she thinks appropriate. Sasikala Natrajan has burning ambition and thinks of herself as the true inheritor of Jayalalithas legacy. She will move mountain and earth to sit on the chair vacated by Amma, even if it causes a split in the party. It is just a matter of time before Tamil Nadu would have her as chief minister.