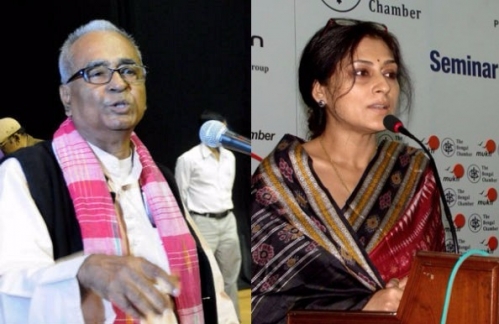 'Sexist' Mollah Disgraces Himself and Party

'Sexist' Mollah Disgraces Himself and Party

By our team of in-house writers. View all posts by this Author
pic courtesy: newkerala.com

The Trinamool Congress (TMC) already had a lot of motor-mouths (Tapas Paul, Anubrata Mondal et al) so there was no need for the party to add one more from the CPM. Abdul Rejjak Mollah is just an opportunist who seeks power and patronage. His latest comments on Roopa Ganguly of BJP are crass and full of sexist overtones. He called her a âtrue Draupadiâ (whatever that means) and said he knew the length of cigarettes she smokes. There were rumours that Jyoti Basu and Vajpayi loved their pegs, but that did not make them lesser leaders. While Mollahâs remarks are in line with the falling standards of political discourse in the country, he and his ilk have decided for themselves that actors are dumb people incapable of contributing to the betterment of society. This is a very narrow view. Even some politicians are crooked people bent on looting the country.

The Election Commission has already issued a notice to Mollah but the TMC should caution him against such insensitive outbursts and if he is a bhadralok then he should make an unconditional apology to Roopa Ganguly.