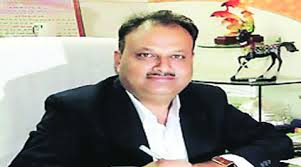 Editor-in-Chief of indiacommentary.com. Current Affairs analyst and political commentator. Writes for a number of publications. View all posts by this Author
As the diaries of Sudhir Sharma, a small time teacher in a RSS-run school who went on to become a mining and education baron, now available with the I.T. department reveal, the system of i-scratch-your-back-and you-scratch-mine is alive and kicking. Sharma is now in jail as the alleged kingpin of the Vyapam scam in Madhya Pradesh that is getting bigger and messier by the day. The problem is that politicians and bureaucrats are so drunk on power and so sure of not being caught that they think nothing of seeking favours from shady characters.

A politician or a bureaucrat, by the very nature of his or her job, should always examine the antecedents of the person he or she is dealing with. Especially under the scanner should be persons who seem to be rolling in newly acquired wealth. It is surprising that none of the politicians and bureaucrats being accused by the I.T. department of having received favours from Sudhir Sharma thought of enquiring how he came into so much money. But it is often said that for the one who receives it, the colour of the money is not important if it passes as legal tender. MP politicians and bureaucrats followed this perfectly.

One they let Sharma scratch their backs by getting him to pay their travel and other bills, it was but natural that they allowed him to go around many rules and procedures. He had a free hand to run Vyapam the way he liked. In the process, he minted money for himself and his highly-placed friends, funded the BJP and the RSS and generally kicked merit and rule of law in the ass.

Amit Shah says Vyapam is a small issue. One should ask what, according to him, is a big issue. To cite an example, Bofors Ã¢â¬" the celebrated corruption case during Rajiv GandhiÃ¢â¬â ¢s time Ã¢â¬" was not even a hundredth of what Vyapam is. Yet, the opposition generated (rightly so) so much heat over the issue. Corruption is corruption, whether for Rs 10 cr or Rs 10000 cr. For, the very act of bestowing favours on a particular individual or group of individuals by bending rules is not governance. It is a crime that should be strictly punished.

The BJP is digging its own grave in MP by shielding the real culprits. For, Sharma just carried out the scam. He could not have done so without the involvement of a large section of the political and bureaucratic machinery in the state. Everyone involved should be punished.