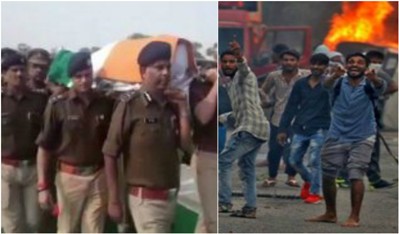 Editor-in-Chief of indiacommentary.com. Current Affairs analyst and political commentator. Writes for a number of publications. View all posts by this Author
It is sad that the UP chief minister, Yogi Adityanath, in his first reaction to the Bulandshahr killing of a police officer, has said that it was not mob lynching but an accident. The first part of his statement may be true (as the latter part of this article surmises), but in saying that it was an accident, the chief minister is either trying to be too smart for his own good or knows things which we do not. How does Yogi know that it was an accident? Was the mob commissioned and was it asked just to create a ruckus to scare the police in dropping the investigation against cow vigilantes? Did it exceed its brief in killing the officer? If so, who commissioned the mob? By his statement, the chief minister has laid himself open to answering too many questions.

As facts tumble out, it is more than clear that the alleged mob violence in Bulandshahr in UP was probably a pre-planned attack on a police officer who was previously involved in collecting evidence against the accused in the Akhlaq murder case in Dadri. The way anti-socials penetrated the mob and the way the police were targeted shows that it was not a spontaneous act. Mobocracy itself is devious, but if political parties, religious outfits or goons hired by interested persons use this route to attack the police then it becomes dangerous.

For one, it undermines the authority of the state. In this case, Subodh Kumar Singh, the station house officer (SHO), was taking down statements of the crowd in the town in an alleged case of cow vigilantism when the mob first entered into an argument with the force and then the anti-social took over to attack and killed the officer and a bystander. There was nothing accidental about the act  it was either mob violence or a pre-planned conspiracy. If, as the chief minister says, it was not mob violence, then it was a conspiracy.

An accident is defined as an unfortunate incident that happens unexpectedly and unintentionally, or an event that happens by chance or that is without apparent or deliberate cause. There was nothing unexpected or unintentional about the way the mob first gathered, then tried to browbeat the police and finally indulged in violence, arson and murder. Maybe Singh was not the target, just maybe his killing happened by chance. But if anti-socials in UP can act with such impunity to attack the police  and thereby undermine the states authority  then there is everything wrong in the way the state is being governed.