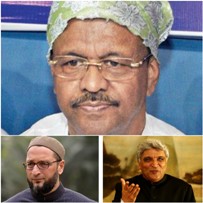 Editor-in-Chief of indiacommentary.com. Current Affairs analyst and political commentator. Writes for a number of publications. View all posts by this Author
Trying to prove secular credentials by raking up unnecessary issues connected with the Muslim community can sometimes back fire big time. Minister in Mamata Banerjees cabinet and mayor of Kolkata Firhad Hakim discovered this to his discomfiture when he questioned the wisdom of the Election Commission in holding the elections during the month of Ramzan. He said that it will put Muslims to agony. He charged the BJP of not wanting the Muslims to vote in large numbers by scheduling the elections during the Holy month.

Several Muslim political and community leaders said Hakim was trying to create a controversy where none existed. They questioned his charge that Muslims will find it difficult to vote while keeping a fast. Asaduddin Owaisi, the president of All India Majlis-e-Ittehadul Muslimeen was scathing in rebutting Hakims charge. He said that it is an insult to Muslims to say that Ramzan will affect our voting. Ramzan increases spiritualism in Muslims and, if anything, elections during this month will only lead to more voting percentage. Wherever elections are held during Ramzan, Muslims vote in higher percentage. Owaisi was also right in pointing out that fasting during Ramzan did not mean Muslims did nothing but fast and rest. He said they did their normal work along with fasting and hence it will not affect them to go out and vote.

Lyricist and community elder statesman Javed Akhtar was even more scathing. He tweeted that I find this whole discussion about Ramzan and elections totally disgusting. This is the kind of distorted and convoluted version of secularism that to me is repulsive, revolting and intolerable. EC shouldnt consider it for a second. BJP leader Ravi Shankar Prasad said that elections during festivals are common. It seems politicians have more problem than those who observe Ramzan. BJPs All India Minority Morcha secretary Arshad Alam added that its not written anywhere in Islam that one has to take rest in air-conditioned rooms while fasting during Ramzan.

Firhad Hakim has blatantly tried to politicize the issue in order to curry favour with the minority vote bank of his party. India is a huge country with thousands of communities. There is always some kind of festivity running in some part of the country. If one expects the Election Commission to factor in religious festivals in addition to exam schedules, excessive heat, excessive cold, monsoons and hundreds of other factors, elections will never be held in India. This must be a sobering lesson for the Trinamool Congress and it must desist from creating needless controversies.