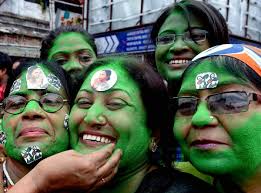 Mamata Banerjee: What a Performance!

Mamata Banerjee: What a Performance!

Editor-in-Chief of indiacommentary.com. Current Affairs analyst and political commentator. Writes for a number of publications. View all posts by this Author
Proving all pundits and psephologists wrong, Mamata Banerjeeâs TMC is all set to return to power in West Bengal with an increased majority. There were many calculations being done during the campaign and many pundits were of the view that the Left-Congress alliance and the relative silence of the voters were a signal that maybe didi would suffer setbacks. Some were also pointing to the fact that since the elections were being held in 6 phases with large deployment of Central forces, TMC would not be able to employ strong arm tactics to win these polls comfortably. Then, the exit polls showed Mamata winning but with a reduced majority and the Left-Congress alliance gaining big. All these proved to be way off the mark and it is certain that TMC will improve upon its 2011 tally.

This has happened despite a united opposition. Arithmetically, if these two had united, given their individual vote shres in past elections, they should have unseated the TMC, especially as the ruling party was on the back foot due to Saradha and other scams and stings. But if this did not happen, it was mostly due to three main reasons. First, the Left parties are a pale shadow of their earlier self. Their cadre base has moved away â some have joined the TMC while the rest had made enough money in three decades to retire to a life of luxury. Their leaders have lost the fire on the one hand while on the other, Mamata has been more Left than them, robbing them of their USP. Secondly, Mamata Banerjee very astutely put her own squeaky clean image on line by shielding other allegedly corrupt leaders in her party. She famously asked the electorate not to vote for her if they found her corrupt. The results show that the voters thought her to be clean and the tactic worked. Finally, Surya Kanta Mishra versus Mamata Banerjee was never going to be a fight anyway.