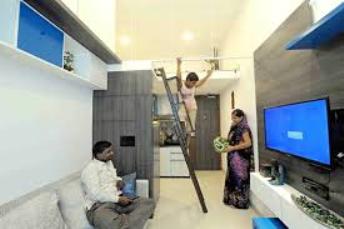 By our team of in-house writers. View all posts by this Author
People are talking about the nano  they cant even be called tiny - flats being sold at mega prices in Mumbai suburbs (as reported by The Times of India). Starting from 189 sq. ft and going up to a luxurious 320 sq. ft, these flats are being built in Malad, Kandivili and Chembur. They are being sold between Rs 53 lakhs to Rs 1 crore, depending on configuration. Mostly, they comprise a bedroom, a kitchenette, micro living area, toilet and storage space. In a city used to living in small spaces, or to those who have spent their lives in slums or tenements, these flats spell opulence. The price seems outrageous to non-Mumbaikars, but residents of the city are used to quotes of Rs 2 lakh per sq. ft in tony localities and hence Rs 28000 per sq. ft. for these flats is not much. But people in other cities, used to living in big flats, are amazed how people can pay such huge sums for such nano flats.

A person living in Assam, for instance, might have a whole room to himself and that would be more than 300 sq. ft, inclusive of attached toilet and dressing space. Granted that Assam is not Mumbai in terms of space or pricing. Still, that person will be left wondering how a whole family can manage in just 189 sq. ft.

In terms of visual appeal, the flats are not bad. In fact, judicious use of space and imaginative design and colour scheme means that these flats are very attractive to those who are upgrading from slums or tenements. One buyer is relieved that he will get 24X7 water in his flat  he says that will eliminate the hassle of going to the common tap in the slum. For him, that is the ultimate luxury.

Still, people are wondering how Mumbaikars can even think of paying a kings ransom for such tiny living spaces. But the way things are progressing in other cities too, there will come a time when large living spaces will move out of the budget of the common man and he or she will have to make do with such tiny spaces at outrageous prices.

picture courtesy: The Times of India