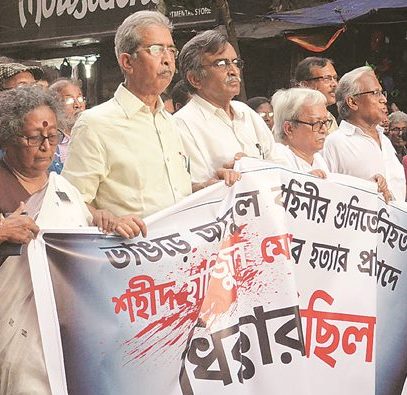 View all posts by this Author
The upcoming panchayat elections in West Bengal (voting is tomorrow, May 14) have been in the news for wrong reasons. First, the electoral process got embroiled in controversy when it came to be known that too many seats were going to the ruling Trinamool Congress (TMC) uncontested, with even the Supreme Court raising question marks on this aspect. Then, violence broke out on a large scale in the districts and panchayat areas just outside Kolkata. TMC wants to win these elections at any cost and unleashed its goons on candidates of other parties and independents to prevent them from filing nominations. Then the state election commission first extended the nomination filing process but then withdrew it, allegedly after pressure from the state government. This resulted in a spate of court cases after which the elections are now going to be held.

But the violence continues unabated. Just two days ago, a person was killed in Bhangar just 30 kms from Kolkata. The area has been in the grip of a turf war between locals who, under the aegis of Save Land Livelihood Environment Protection Committee (SLLEPC), are protesting against a sub-station coming up there and local tough Arabul Islam who was expelled from the TMC but, as the locals allege, was readmitted unofficially in 2016. Member of TMC or not, Islam has been looking after the partys interests in the area since 2016. But such is the fear of the courts that as soon as news of violence broke out, CM Mamata Banerjee instructed the police to arrest him. The BJP has called the arrest eyewash. With the Supreme Court passing adverse remarks and the High Court frowning upon the large scale violence, the government fears that fresh violence might lead the opposition to file a case for delaying the elections and this might not be to TMCs advantage. Hence it is being very careful.

But why has the CM got to instruct the police to arrest Arabul Islam? Is it not the duty of the police to arrest trouble makers? Despite denying that Islam is a party worker, this episode shows that he is under TMC protection and has only been arrested because the CM ordered it. Otherwise, he has been allowed a free run of Bhangar for the last two years. It is because of his muscle flexing in the area that locals have now formed the SLLEPC and stood as independent candidates for the panchayat elections. It is really incomprehensible why a party that claims to have the support of the people needs to prevent opposition candidates from filing nominations. Is it scared of losing in a contest? Although Mamata Banerjee calls Modi undemocratic, what has been going on in West Bengal for the last couple of months is not democracy either.