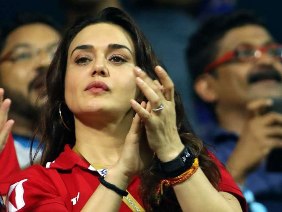 Anukriti is a student who dabbles in writing when she finds time. View all posts by this Author
In any sphere in life, when one is losing and unsure of ones place, is it proper behavior to rejoice at the loss of a similarly placed opponent? Preity Zinta, co-owner of IPL team Kings XI Punjab, is reported to have said that I am just very happy that Mumbai is knocked out  very happy She was immediately trolled on social media for her behavior, which some termed obnoxious.

To be fair to Zinta, she later clarified that she did not mean it that way. With Mumbai and Punjab both on same points, it was necessary for Mumbai to be beaten and Punjab to win for the latter to have a slim chance of going ahead to the play-offs (although it later transpired that Punjab also lost and both Mumbai and Punjab made unceremonious exits from the tournament). Preity said that she rejoiced at Mumbais loss as she thought that Punjab had a chance to move ahead if they won their next match.

But the manner in which she rejoiced and the way she uttered those words (as gleaned from the video that has gone viral on Twitter) did not give that impression. It seemed that given Punjabs precarious situation in the tournament, Preity was rejoicing that the star-studded Mumbai team, owned by the wife of Indias richest man, had also lost and was knocked out. It seemed that she was taking vicarious pleasure in Mumbais loss in order to reduce the pain arising out of her teams condition. That was not proper behavior.

Zinta has been in the news for wrong reasons lately. It was reported sometime back that she had a showdown with team coach and former Indian batting great Virender Sehwag over tinkering with the batting order. This was later denied by both of them but the damage to Zintas reputation had already been done by that time. Zinta is an effervescent character, given to hugging players when they win and sulking and even giving them a piece of her mind when they lose. She doesnt take to losing kindly. But rejoicing at an opponents loss in the manner she did is improper behavior and hope Zinta has learnt her lesson.